May 19, 2021
“I understand why people end up on the streets, but even the storm runs out of rain. Nothing is permanent, no matter what it may feel like.” U.S. Army Veteran Alberto tells his story. 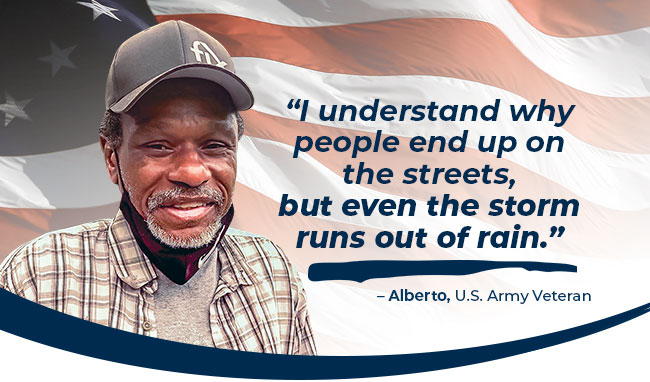 A Berkeley graduate who married his high school sweetheart, U.S. Army veteran Alberto never expected his life to fall apart so quickly. Unexpectedly diagnosed with schizophrenia in his mid-20s while he was serving his country, everything Alberto had worked for and believed in, crumbled. It is not unusual for mental health symptoms to appear in the mid to late 20s, leading to homelessness and family estrangement. Now housed with Step Up for close to five years, Alberto is overjoyed to have reconnected with his family and grandchildren after a long and arduous 20 years of homelessness in Los Angeles!

The eldest of six children in a family headed by a career Army man, Alberto was born on a military base in Panama. He was encouraged to secure an education and ended up majoring in political science at UC Berkeley. He decided to join the Army and was stationed in Hawaii. There, he learned to drive tanks. As Alberto’s symptoms of schizophrenia began to develop while serving, he was discharged from the Army after 3 years.  He got divorced, and his wife took their two children to Maryland. Alberto’s training qualified him to drive for Loomis Armored and a delivery service. But it was difficult for Alberto to hold jobs and after he was seriously injured in a work-related accident, he lived on the streets and used drugs and alcohol to numb his pain. 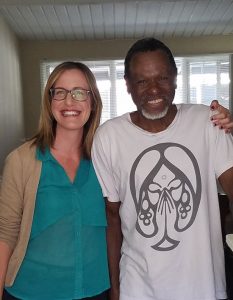 Alberto’s first Step Up Service Coordinator, Lauren Eccker, took Alberto to the VA to help get him a new ID and start his new life.

After almost 20 years on the streets, Alberto wanted help and Step Up’s Veteran Affairs Supportive Housing (VASH) team were able to support him in getting a Veteran’s housing voucher, moving into an apartment and getting stable on medication for his schizophrenia. Alberto’s goal has been to reconnect with family, “I have a son and daughter on the east coast. We’ve been connecting virtually and I hope to go visit them and my grandchildren in August.” Alberto is working with VASH Service Coordinator Trachelle Singleton, who is inspired by Alberto’s attitude towards change, “Sometimes client’s issues can feel like forever issues, but it’s like he always knows that eventually things will change.” Alberto says, “We have to look at what we can do positively and work toward that.”

Because of the generosity from supporters like you, Step Up’s Veteran services has made all the difference! Grateful to be housed, Alberto continues to return to talk to others on the streets and has referred three other veterans experiencing chronic homelessness now housed through Step Up’s Veteran’s Programs, “I really want to do peer counseling to help others.” He knows that permanent supportive housing is the cornerstone of all Step Up’s services, rooted in evidence-based Housing First practices that get results. Housing is healthcare, leading to stability and long term recovery.

With your support, we can do more for veterans! Every gift, regardless of amount, has an impact! Please make a gift today.