Step Up and Building 209: Allowing Veterans to Heal and Recover in Their Own Homes

November 11, 2018
In January 2017, Step Up and its development partner, Shangri-La Construction, were awarded the Extended Use Lease (EUL) for Building 209 on the West Los Angeles Veterans Administration Campus. Built in 1940, the completely renovated and refurbished building includes 54 apartments that opened on June 9, 2017 for Veterans who… 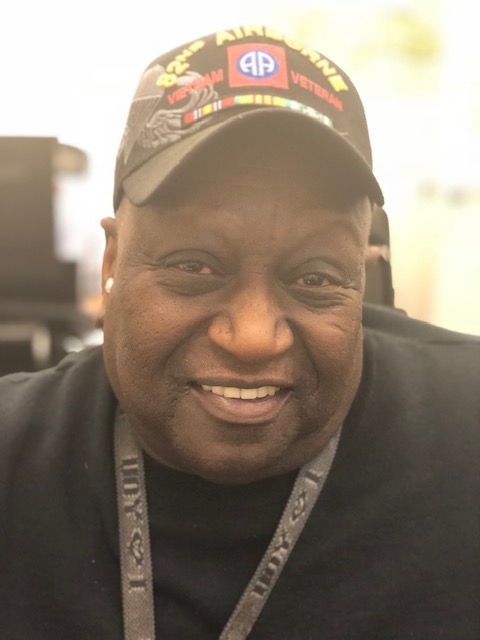 In January 2017, Step Up and its development partner, Shangri-La Construction, were awarded the Extended Use Lease (EUL) for Building 209 on the West Los Angeles Veterans Administration Campus. Built in 1940, the completely renovated and refurbished building includes 54 apartments that opened on June 9, 2017 for Veterans who are 55 or older and have experienced homelessness and some kind of disabling condition. Step Up offers onsite supportive services and linkage to resources on the VA campus and in the community. In addition to the services offered through Step Up’s Veterans Affairs Supportive Housing (VASH) team, weekly activities are scheduled free of charge to the residents. This is the first of many developments Step Up is working on to end Veteran homelessness in Los Angeles.

One of its newest residents, Preston W. Wilcox, Jr., never thought he would end up experiencing homelessness. Mr. Wilcox, a Vietnam Veteran who served in the Army as a communications specialist with the signal corps, had a 38-year career as a registered nurse and he earned a solid income. He attributes much of his downfall to two things: a motorcycle accident and his role as “the go to guy” for financial support for family and friends.

Born in Atlanta, GA, Mr. Wilcox grew up on a farm. He lived with his mother and her husband, until his mother died when he was nine. He then lived with his grandmother, who died when he was 11. He then moved to Los Angeles to live with his biological father, whom he had never met. Mr. Wilcox describes his father as a “rigid, but kind and loving dad.” He graduated from Dorsey High School, then began working toward earning his Licensed Vocational Nurse degree at Pierce College, but was interrupted by a choice presented to him by a judge – either serve jail time or enlist in the Army. He joined the Army.

With an honorable medical discharge from the service, Mr. Wilcox returned to Los Angeles to continue his nursing degree. Later, he completed a program at Cal State Northridge to become a registered nurse.

Mr. Wilcox describes himself as a workaholic, who thrived as an RN in emergency rooms. He also learned about “plastics” and reconstructive and plastic surgery through the Grossman Burn Center. On June 9, 1980, Mr. Wilcox was one of the RNs on duty at the Sherman Oaks Hospital when comedian Richard Pryor, who famously set himself on fire after binging on cocaine and alcohol, was rushed in with severe burns. Dr. Grossman asked Mr. Wilcox to tend to Mr. Pryor during his hospital stay. They became friends.

His friendship with Mr. Pryor led to a short acting career. Mr. Wilcox appeared in Jo Jo Dancer, Your Life is Calling and in several television shows such as Law & Order and Hill Street Blues.

Mr. Wilcox was in a motorcycle accident that damaged both of his knees. Then, his knees were shattered when a delivery truck crashed into him while driving, which sent him over the center divider. He was transported to the VA hospital for urgent care. While in the hospital, he contracted MRSA in his knee. MRSA or Methicillin-resistant Staphylococcus aureus is a dangerous infection, difficult to treat, and can cause a number of complications. Because Mr. Wilcox’s leg was infected with MRSA and filled with blood clots from the current and previous accident, he underwent a voluntary amputation rather than risk an embolism.

He is a widower. He was married to Jean, the love of his life “who made me a better person,” died three years ago. That’s when his life completely changed. He started working as a property manager for a cousin who ran transitional living apartments. When that business failed, he moved in with the cousin. He paid his way financially and by performing chores such as driving her kids to and from school, cooking and cleaning. He describes the situation as abusive, but he endured it until the day she came to him and told him he needed to move out.

Mr. Wilcox had nowhere to go. He spent all of his savings to live with his cousin and to help her out financially. He ended up living at a transitional shelter for Veterans in South Los Angeles for seven months. He shared a room with three other Veterans.

Now in his own home, Mr. Wilcox is beginning to understand more about himself and the puzzle that has been his life. He is working on his own recovery from being a co-dependent caregiver. He is taking better care of himself and can finally sleep peacefully, in his own bed, in his own home.